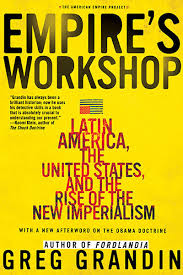 A reflection on Empire’s Workshop: Latin America, the United States and the rise of the new imperialism, by Greg Grandin, published in 2006 and updated in 2010.

So many books have been written about US intervention in Latin America that, when this one was published a decade ago, it might easily have been overlooked. Grandin’s approach was different however: he concentrates not so much on how the US intervened, but why it does, and how this fits into evolving US foreign and domestic policies more generally. He shows that US intervention has at different times had strong political, economic and even religious motives, with the US often treating Latin America as its ‘workshop’ for new approaches to intervention that it has yet to try elsewhere.

As I did not read his book until 2019, I was particularly taken by the present-day salience of Grandin’s analysis of US support for the ‘Contras’ in Nicaragua during the 1980s, and how this was handled domestically (given that for several years the policy was effectively illegal). As is well known, the Contra war against the Sandinista government cost 30,000 lives and did huge damage to a struggling economy. When found guilty of causing an illegal war by the International Court of Justice, the US simply walked away from the court’s jurisdiction. But its refusal to accept international institutions and their judgements is only one instance of a striking parallel between US policy then and now.

What Grandin did was to explore the whole propaganda apparatus that developed to sustain the Contra war and minimise the blowback within public opinion in the US itself. He provides a huge list of tasks that the Office of Public Diplomacy for Latin America, set up by Reagan in 1983, was intended to accomplish in just one two-month period in 1985, designed to malign the Sandinistas as communists and promote the Contras as freedom fighters. The fact that the Contras were guilty of the most horrendous tortures and executions was to be glossed over. Instead, it was the Sandinistas who were accused of atrocities. One facet of the plan was to produce so much one-sided evidence that the media would simply find it too troublesome to unearth the real stories. As one journalist admitted, it would take months of research for a story ‘that would take up only five minutes of air time’ and that this was ‘not a way to be successful’. Of course a few reporters, like the brave Gary Webb, did do the research, and his fate after breaking the news of the Contra dependency on drug money was a salutary lesson to other would-be investigators.

The US was on a mission, endorsed by many US evangelical preachers who believed that the Sandinistas were pursuing the ‘economics of Satan’ and that in order to defeat them killing was ‘not only right but a duty of every Christian’. The Sandinistas might be accused of human rights violations, but according to Jerry Falwell the forces opposing them ‘had to bring wrath upon those who do evil by hurting other people’.  The preacher and ‘moral lawyer’ John Eidsmoe asserted that the way to promote freedom was first to win the war, and only afterwards work for human rights.

The protagonists of the argument that American power can ‘mend the world’ first made the case for achieving democracy and nation building through the barrel of a gun in Central America, before going on to use it even more devastatingly in Iraq. Many of the protagonists – warriors in business suits like John Negroponte – turned up in both arenas of warfare. Under Trump, we’re now seeing others of their number given a new political life, such as John Bolton (whose job under Reagan was to help cover up the illegal funding of the Contras) and Elliot Abrams, whose twisted interpretations of human rights justified continued support for the Contras (and for the equally horrendous regular forces in El Salvador) regardless of the violations they carried out.

Another ‘direct outgrowth’ of Reagan’s Central American policy in the 1980s were the quasi-private organisations developed to ‘promote democracy’ in Latin America and elsewhere, funded by the National Endowment for Democracy and by USAID. As Grandin succinctly puts it, they became a ‘vector for transnational conservative coalition building throughout the hemisphere’. Today, they ‘do overtly what the CIA used to do covertly’ and (as a founder of the NED put it) they ‘menace left governments throughout the region’. They were doing this in Venezuela after Hugo Chavez came to power, using (as Jonah Gindin explores) similar methods to those deployed in Nicaragua before the 1990 elections. They went on to use them more successfully to promote coups in Haiti in 2004 and Honduras in 2009 (where, of course, the US ignores huge human rights abuses, not to mention blatant electoral fraud.

And they have been at it again in Nicaragua, where the NED admitted last year that it was “laying the groundwork for insurrection”. Their attempt began on April 17 2018, when a government that had merely proposed modest reforms to social security provisions was – within 24 hours – being accused of gross human rights abuses. By 2018, their methods had moved on, of course, focussing on the deployment of social media to sow confusion, plant false messages and provoke dissent against an elected government that had already been characterised as a ‘dictatorship’. The barrage of accusations against the government covered up the kidnapping, torture and murder being carried out by the opposition. The conflict produced 253 deaths, including 22 police, 31 protesters (half were students), 48 Sandinista supporters and 152 members of the public.

John Bolton this year identified Nicaragua, Cuba and Venezuela as a ‘troika of tyranny’ where ‘the perils of poisonous ideologies’ have been left unchecked. The US government’s duty is now to promote their ‘freedom’. Grandin calls the word ‘freedom’ a ‘universal signifier’ used to bring together and enlist the support of secular nationalists, political liberals, free-market dogmatists and evangelicals. Little attention is paid to who is being given freedom, and to do what.

For example, during last year’s near-coup in Nicaragua, those who had previously organised demonstrations against the government’s project for an interoceanic canal (marches often marked by violence, as the protesters invariably carried machetes), planned and executed a massive armed attack on a rural police station which left five dead and nine kidnapped. When caught and tried, the three organisers received multiple prison sentences, even though in practice they will serve a maximum of 30 years. “The Ortega regime has sentenced three farm leaders to 550 years in prison” tweeted John Bolton, showing the same selective interest in human rights that he’d displayed under Reagan in the 1980s. “Ortega’s days are numbered,” he went on, “and the Nicaraguan people will soon be free.”

Just as in the Reagan era, the press have shown little interest in incidents like this one, preferring to focus on others where it seems easy to call out the Sandinista government for human rights abuses, providing you accept the opposition’s account of events and avoid digging very far below the surface to look for alternative explanations. But fortunately, as in the Reagan era, most Nicaraguans – even if initially misled by the social media onslaught – are astute enough to judge through their own experience who is most guilty of human rights violations, hence the rapid decline in the opposition’s support in July last year after the worst atrocities occurred. Reading Greg Grandin’s book in this new context is a reminder of just how much the current propaganda war has in common with the one carried out over three decades ago. The scale of the attack on Nicaragua in the 1980s was hugely different, and the country is now more resilient, but in the US ‘workshop’ many of the familiar methods are still being tested and deployed.

This article is also available at Tortilla con Sal.