You are here: Home > Latin writers 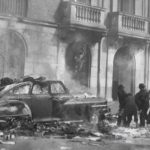 The man with the typewriter

On 9 April 1948, the Colombian politician Jorge Eliécer Gaitán stepped out of his office with a group of friends to walk to Bogotá’s Hotel Continental for lunch. An assassin confronted him in the street and shot him three times in the face and chest. He died shortly afterwards. His supporters caught the 20-year-old culprit, […]

A review of Fidel & Gabo: A portrait of a legendary friendship, by Angel Esteban and Stephanie Panichelli Two of the best-known Latin American figures of the twentieth century, Fidel Castro and Gabriel Garcia Márquez (Gabo) were close friends. This book claims to be the story of their relationship, but does it do it justice? […]

The Robber of Memories

The Robber of Memories by Michael Jacobs, Granta, 2012. Colombia’s Magdalena River could claim to be the second most important in South America after the Amazon.  In some ways it’s more important, if a judgement hinges on the Spanish conquest and its aftermath, since the Magdalena allowed the invaders to reach the Andean regions where […]

Gabo in his labyrinth

With the recent death of Carlos Fuentes only two living writers remain from the period of ‘el boom’ in Latin America, Gabriel Garcia Marquez and Mario Vargas Llosa.