You are here: Home > Latin America > Guantánamo – time to end the lease

Guantánamo – time to end the lease 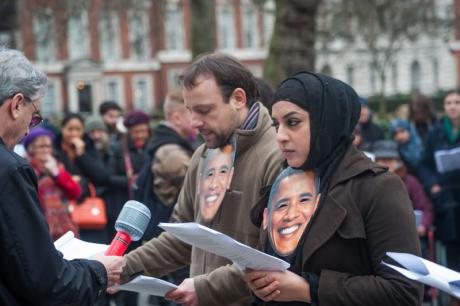 Those who would protest that only regime change and full recognition of human rights in Cuba should precede any deal have surely had their arguments demolished.

This month marks the 112th anniversary of the signing of the lease for the Guantánamo base between the Cuban and US governments. For at least half this period the base hasn’t been welcome in Cuba, and it’s high time the US worked out a timetable to hand the land back to the Cubans. The current negotiations between the two governments provide an excellent chance not only to recognise the injustice of the lease but also for the US to pursue two of its own objectives about the base and about Cuba. So far, the issue isn’t even on the table, but it should be.

The legality of the base and especially of the GITMO prison has long been in doubt. For a start, the original lease is for a naval base and coaling station, not a prison, and expressly excludes use of the land for any other purpose. On the face of it, as soon as the prison was established there, the lease was violated. But the questionable legality of the lease goes right back to before it was even signed.

At the very end of the 19th century, Cuba became a virtual colony of the United States as a result of the latter winning the so-called Spanish-American war. Initially the US gained Cuban support by promising (through the ‘Teller Amendment’) that its role was temporary and it would then ‘leave the government and control of the island to its people’. But what should have been the final stages in Cuba’s war of independence became instead (according Richard Gott) a four-year US military dictatorship that lasted until 1902. When Cubans showed renewed signs of wanting the independence they thought they’d already won, it was permitted only after they were humiliated into accepting the ‘Platt Amendment’. This effectively reneged on the earlier promises, established a permanent right for the US to intervene whenever it felt the need, and specifically required Cuba to lease land for ‘coaling or naval stations’. On the face of it, Platt both legitimised a series of military interventions over the period until 1923 and paved the way for the Guantánamo lease. Although it was repealed in 1934, the amendment was replaced with a new treaty that allowed the naval base to be kept indefinitely. The US hold on Guantánamo was further tightened by the Helms-Burton Act in 1996: this effectively made the return of the base conditional on regime change in Cuba.

However, this did not make the holding of the base legitimate under international law. As Cuba has pointed out, the ‘lease’ was effectively imposed under the threat of force and would now be illegal under the Vienna Conventions. As a measure forced on the then Cuban government, it was hardly a mutually beneficial arrangement. The fact that the US only pays just over $4,000 annually for the lease (with cheques that are never cashed) is a further indicator of the scale of the injustice. It is an anomaly that cannot be sustained if normal diplomatic relations between the two countries are to be restored, as Obama wishes.

How could both sides reach an accommodation which isn’t seen as a climb-down? Obviously, Obama’s ongoing embarrassment about Guantánamo has little to do with the lease of the base and everything to do with his undelivered promises to close GITMO. Over 100 prisoners are still incarcerated there, with few signs that the prison’s closure can be secured before the end of Obama’s term of office. Can the two issues – ending of the lease and closure of the prison – be solved through an extension of the current diplomatic talks between the two countries, which have just resumed in Havana?

A brilliant suggestion which warrants wider discussion has been made in The Havana Times, a blog run by Circles Robinson. Robinson builds on the apparent success of the transfer of a handful of GITMO prisoners to Uruguay, where they were welcomed by former President Mujica and (so far) seem to have resettled without problems. Why not, he suggests, ask Cuba to accept GITMO prisoners in a similar way? Their transfer across the land boundary could be phased, there could be agreement about how they would be treated, and Obama could progressively shut down the prison. On the precedent of the handover of the Panama Canal in 1999, he could also agree to a date for the future termination of the lease, allowing plenty of time for deactivation of the naval base.

One of the obstacles to normal US-Cuba relations will inevitably be the confiscation of land from US citizens (or people who have subsequently become US citizens) after the 1959 revolution. This is an issue which continues to dog Nicaragua, more than thirty years after its own revolution, but nevertheless a process is in place there to recognise and deal with claims, and it is moving towards a conclusion. Cuban land claims are likely to present more formidable problems, but (as Robinson suggests) one way in which the US could ease their resolution would be by putting some of the savings from closure of the base into an agreed restitution fund. Indeed, this fund could also be created partially in recognition of the massive underpayments on the true value of the lease which have gone on for more than a century.

As the author of a history of the Guantánamo base, Jonathen Hansen, has said in the New York Times, Obama has the chance to ‘rectify an age-old grievance and lay the groundwork for new relations with Cuba and other countries in the Western Hemisphere and around the globe’. Those who would protest that only regime change and full recognition of human rights in Cuba should precede any deal have surely had their arguments demolished by the growing evidence of the massive abuses that the US has itself perpetrated on Cuban soil. Obama has the chance to deal with two huge causes of US embarrassment: one that he is partly responsible for and one that dates back over a century and that previous presidents have ignored.

Original post and comments: Open Democracy and The Havana Times