You are here: Home > Latin America > The Plot to Control the World

The Plot to Control the World 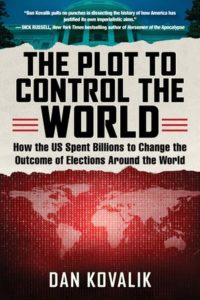 ‘Make America Great Again’: Trump’s slogan seems both to yearn for a time when the United States had more influence, and to call for its pre-eminence to be restored. In its own way, it asserts that the US is – or should be – different.  In fact it was only Trump’s predecessor, Obama, who was the first president to talk regularly about American exceptionalism, yet to Trump it is something that is long lost and it is his job to recover it. Yet belief in the US’s exceptional nature has been a constant feature of the country’s history, whoever has been president, and continues right up to the present day.

Its starting point in the early nineteenth century was the ‘Monroe doctrine’, the assertion of the US’s pre-eminent power in the western hemisphere, replacing the old colonial powers such as Spain and Portugal. Its domestic counterpart was the US’s God-given ‘manifest destiny’, which justified settlement of the whole North American continent, regardless of the presence of the people to whom much of the land already belonged. Whereas the Monroe doctrine at first reflected a degree of respect for the then newly emerging Latin American nations, by the end of the century it only thinly disguised a new kind of imperialism which justified US intervention anywhere in the hemisphere.

Soon after the end of the second world war, the former ‘great powers’ began to give up those colonies that had not already been returned to their rightful owners. But, fuelled by the cold war, the US began a new phase of imperialism. Dan Kovalik, in his new book The Plot to Control the World, quotes a report, which he says is almost certainly an underestimate, that the US interfered in 81 foreign elections between 1946 and 2000. And even that number omits more serious interventions such as US-provoked coups, assassinations and invasions. Yet, as Kovalik says, ‘American exceptionalism’ requires a belief that the US is a unique force for democracy and freedom in the world. This enables the New York Times to justify US interference in the affairs of other countries because the US is unique in using its power to challenge dictators or otherwise promote democracy, whereas Russia (say) more often intervenes to disrupt democracy or promote authoritarian rule.

Dan Kovalik is far from the first author to show US intervention in its true light. Chomsky, William Blum and many others have trodden this path with, it seems, little effect on the conscience of most of the US population or, for that matter, on that of much of Europe’s. Kovalik’s approach is to take ten examples, reduce the history of each to its essentials, recount it in very readable form and ensure that it is bang up to date. In response to the current obsession with Russian interference in the last US presidential election, he begins with an account of the much more drastic action taken by the US to ensure the right result in Russia’s 1996 election. The rest of his choices are also strategic: Iran (where the long history of US interference began when it halted an emerging democracy in its tracks), Guatemala (where it did the same and created the conditions for a war in which perhaps 300,000 people died), Congo (which was on the point of bringing to an end perhaps the world’s worst colonial nightmare), Brazil (to show that even a giant among developing powers was not allowed to shape its own future), Vietnam (for the genocide which the US unleashed), Chile (to aid the birth of neoliberalism), Honduras (showing that the supposedly liberal Obama-Clinton administration could also disregard democracy), Nicaragua (where the story comes up to 2018) and Ukraine (where the US aims to deny Russia the right to influence even what happens on its own doorstep).

In Latin America, Kovalik uses five examples, but in truth he could have cited almost every country that is a former Spanish or Portuguese colony: of those, only Costa Rica has not been the subject of US intervention and arguably the US is so dominant in its economy and the country has been so obedient in never electing rulers who have challenged US hegemony, that it has earned its immunity. While most of the former British, French and Dutch colonies have been exempt from direct interference, there have been notable exceptions. The most obvious and most recent are Grenada in 1983 and Haiti on multiple occasions. One wonders what President James Monroe would think now of the consequences of the doctrine that still carries his name.

Kovalik quotes Harold Pinter as saying that an important feature of US interventions is that they ‘never happen’. Even while they are happening they aren’t happening. Everyone should look away. So often the role of the supposedly liberal media is to turn a blind eye, especially when a US-provoked disaster is taking place, or to tell the story that favours the intervention, rather that of people who suffer from it or are resisting it. Nicaragua is a case that is very much in point.

Dan Kovalik is a much better writer than William Blum and more accessible than Noam Chomsky. His book should be required reading in US colleges and could be a useful reminder to many politicians, political commentators and journalists in Europe of the real nature of the US’s ‘exceptionalism’. As the title says, what it really amounts to is an often overlooked and not very subtle ‘plot to control the world’. Why isn’t this the message conveyed by the mainstream media, and when will they start to tell the truth?

One response to “The Plot to Control the World”