You are here: Home > Latin America > Five out of five

Five out of five 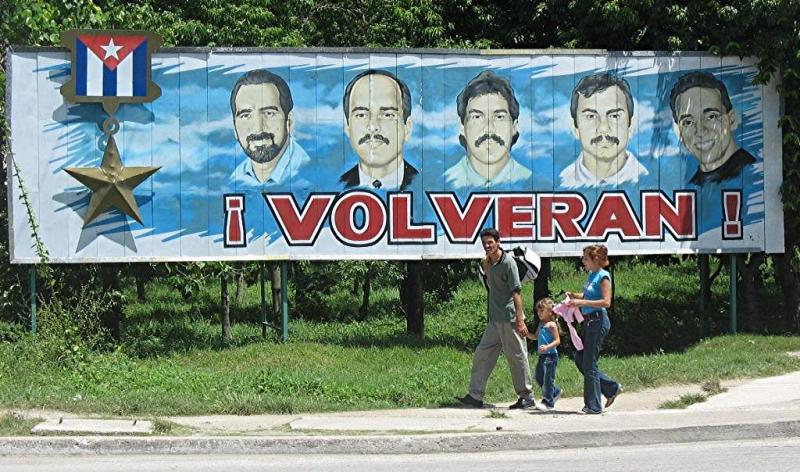 Billboard calling for the return of the Cuban Five
Photo: cubanismo.net

On the morning of 17 December, schoolchildren in Coralito assembled under the Cuban flag to sing the anthem before starting lessons. Early sunshine picked out five palm trees on the roadside opposite the school. They were planted in support of the ‘Cuban Five’, agents sent to Miami to disrupt anti-Castro plots by Cuban exiles in 1998, but arrested and imprisoned for spying against the US. There are symbols or images of the Five all over Cuba, often accompanied by Castro’s declaration ‘Volverán!’ (‘They will return’). Last February Fernando González, the second to finish his sentence, returned to Havana, but the remaining three had longer sentences: one, Gerardo Hernández, was serving two life terms.

The news that morning was tantalising: Alan Gross, imprisoned in Cuba as a US spy since 2009, had been released ‘for humanitarian reasons’. Would there be an exchange of prisoners? People knew only that Raύl Castro would address the public at midday about ‘a new development in Cuba’s relationship with the United States’. When it came, it turned out that the remaining three Cubans were already ‘en casa’. A second CIA agent had also been released as part of the deal. Furthermore, the two countries had agreed to re-establish diplomatic relations.

I’d met Fernando González a few weeks earlier. Conditions for the release of his three colleagues had never been more propitious. The last year of Obama’s presidency was an opportunity that would probably not recur, even if he were succeeded by another Democrat (Hillary Clinton is notably more hostile towards Cuba). A series of editorials in the New York Times had called for the release of the Cubans and of Alan Gross; for better relations in the light of Cuba’s prominent part in the fight against Ebola in West Africa; and for the end of the trade embargo. During his five years in jail, the 67-year-old Gross had become increasingly depressed and ill, fearing he would die in prison. (The Five, by contrast, appear to have maintained faith that they would be released throughout their imprisonment. Irma Sehwerert, René González’s mother, made this clear to me when I met her a year before he was the first to be set free.)

But despite the promising circumstances, I don’t think Fernando knew that an exchange of prisoners was imminent. Most Cubans were both surprised and delighted by Castro’s deadpan announcement. People grumble about the problems of day-to-day life in Cuba: wage levels, the price of clothes and electrical goods, the lack of transport. But everyone I asked said either how happy they’d been to hear the announcement or how lucky I was to be in Cuba when it was made. A teenager called Pablo told me his friends were all talking about it and what the change in US attitudes might mean. There’s a hope it might presage the end of the trade embargo. Manolo, generally cynical about politics on both sides of the Florida Straits, was a lone sceptical voice: ‘Neither side is telling the truth; we’ll probably never know the real reasons why the Five or Alan Gross were imprisoned.’ 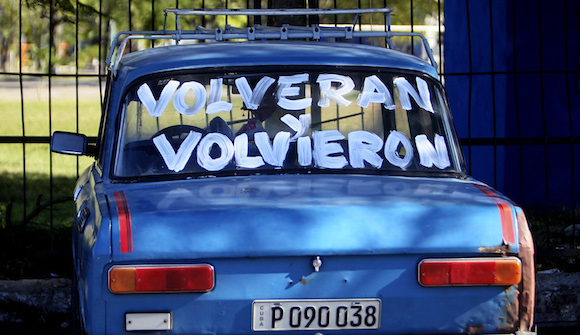 Slogans on a car: ‘They will return’ and ‘They returned!’
Photo: cubadebate.cu

In the small village of Cajalbana, four neighbours came to the house where I was staying to sing songs after dinner. One was a 23-year-old with a guitar. His first song, which he’d written some time ago, was a homage to the Five: ‘I wish all this were a dream, the Five were free, and everything back to normal.’

A farmer called Elvis and his son run a smallholding in a remote place called Vejuquera. Among their animals are a lot of small wild birds which the son has caught and put in hand-made cages. Amey, a ten-year-old travelling with us, asked if she could take some of the birds with her. Elvis’s son reluctantly extracted two from a cage, and put them carefully into a paper bag with air holes cut in the sides. On the journey back in our 60-year-old hired Plymouth, Amey was teased about her plan to keep the birds when earlier she’d wanted to set them all free. After a few minutes she asked to stop the car, stepped out, opened the bag and let the birds fly into the bushes. ‘Let’s set them free,’ she said, ‘like the Five.’

One response to “Five out of five”