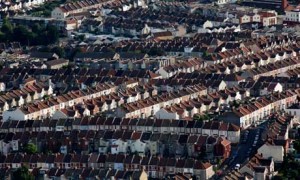 A little-noticed effect of the government’s universal credit scheme is that it draws more people into the benefit system.

Research recently published by the Chartered Institute of Housing draws attention to the widening scope of the benefit system, which will be a significant side effect of universal credit when it starts to roll out in October.

The government hasn’t released a forecast of total numbers of claimants under the new scheme compared with numbers under the various different benefits that it will replace. But it has shown there will be more gainers than losers, and even the losers will get temporary protection in many cases.

One of the key advantages of the new scheme is that it removes the confusing overlaps between tax credits and housing benefit, which currently mean that working households can suffer high loses in net income if their wages increase. Under the present system the loss can be as high as 96p of every £1 increase in gross earnings. By combining credits and benefits, universal credit aims to ensure that working households keep at least 20p of every extra pound they earn. 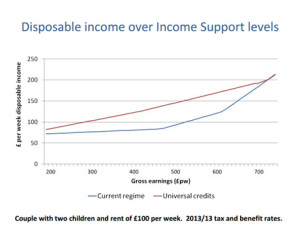 The chart shows the difference between the current and planned systems for a couple with two children, and a rent of £100 a week. If their gross earnings are £400-600 a week, they should be about £50 better off under universal credit.

While the improved work incentives are factored into the cost of universal credit, much less attention has been paid to the fact that many more working families will be eligible for help. By abolishing the poverty trap associated with the overlap of the housing benefit and tax credit in which benefit is withdrawn as incomes rise, the impact of the universal credit on take-home pay is less abrupt, and so eligibility will extend much further up the income scale.

Whereas our sample family drops out of the housing benefit system when their gross earnings rise to about £480 a week, and tax credits at about £620 a week, they’ll soon be able to continue drawing universal credit until they earn as much as £725. For this family, if their rent were to be £130 they would simultaneously be eligible for universal credit and the higher tax rate (40%).

The implications of the widened welfare net are considerable. For landlords, more tenants will be eligible for benefits or credits and may need help to claim them. And as rents grow, so will the numbers who can claim and an even greater share of landlords’ incomes will depend on benefits.

More people will be affected by future changes to the benefits system, since the housing element of universal credit is forecast to continue growing and is under extra scrutiny following the government’s spending review.

Politically, it’s a challenge for a government that until now has been quick to criticise benefit recipients, particularly as its policies on rents will draw more people into the system. Will the fact that there are unknown numbers of extra claimants for universal credit than there were for the benefits it replaces, lead to a shift in political or even public attitudes? If universal credit rolls out as planned, we will soon start to find out.