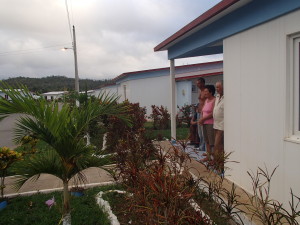 Residents whose homes were destroyed in hurricanes in their new ‘petrocasas’ homes.

In the space of ten days in 2008 Cuba was hit by two of the most powerful storms in its history, causing $9.7 billions of damage to homes and infrastructure from which it is still recovering.  Worst affected was the western province of Pinar del Rio. Hurricane Gustav arrived with such force that it wiped out whole villages. Wind speeds reached 340 kilometres per hour, thought to be a world record until the recent typhoon in the Philippines. Just over a week later Hurricane Ike brought torrential rains which flooded low-lying areas and wiped out crops. All together, 82,000 homes in the province were destroyed or badly damaged.

Recently I talked to people about their experiences of that night and what happened to them subsequently. Cubans are well trained to protect themselves from hurricanes by talking shelter, so there were few deaths. One couple created a refuge under their kitchen table but saw their apparently strong roof of fibre-cement panels completely blown away. They said the scene next morning was ‘like a cemetery’. A neighbour’s house had disappeared, leaving only the floor intact; on it stood the family’s sole remaining possession, their fridge.

Misael Avila, his partner Dailin and their young child had a wooden house in the small town of San Andres. When they returned on the morning after the first storm, their house and about thirty others not resistant to winds had been destroyed. They salvaged what remained, built a small shelter and with other community members began to seek help from the government. Practically all crops were destroyed by the second storm, so they depended on emergency rations until replanting produced new harvests and markets reopened.

Among the officials that came to assess their needs, they received a visit from Venezuelan President, Hugo Chávez, in Cuba to offer help in the aftermath of the hurricanes. His motorcade stopped and he asked people about the problems they faced. Most mentioned the disrupted water supply. Chávez promised to talk to Cuban officials, and ten days later a survey was carried out. The plan then announced included a housing project, the first time that the community had any inkling that they might also get new homes.

The scheme came with strings attached. The families taking part would have to commit to three months of unpaid work, preceded by a training programme in which they would band together with some expert help to rebuild the damaged homes in the community. The houses would be built of PVC panels, a petroleum by-product used in Venezuela’s national ‘housing mission’. Within a few months of his first visit, Chávez came back to check progress. Nothing had started, but work began weeks after he left.

Using Venezuelan earthmovers, Cuban engineers levelled the land, the residents who had lost their houses were trained, reinforced foundations were laid and the prefabricated petrocasas (as they are now known) erected. The small estate of 30 homes was finished in 2011.

When I visited in December, Misael proudly showed me his spotless, spacious house and pretty garden. He makes an almost token payment of two dollars per month for it. If he keeps up the payments for 15 years, the house and the plot it stands on will be his.

This isn’t the only Venezuelan project using petrocasas. The first was in Los Palacios, the place where Hurricane Gustav made landfall. Its 38 houses were finished at the end of 2009. Another estate is now under construction not far from Misael’s house. Separately, the government is helping people replace traditional corrugated iron roofs with ones made of a stronger, hybrid material called Trimax (a polystyrene/concrete mix reinforced with wire mesh).  Within three years of Hurricane Gustav the 57,000 worst affected houses had been repaired or rebuilt with government help, but many of the remaining families have had to find their own solutions.

Cuba’s overall housing needs are considerable; recent storms have diverted efforts into emergency housing and made the backlog worse. An official report last year said that 39 per cent of the stock is in only adequate or poor condition, and the unofficial housing deficit is 700,000 homes. Population growth is static so the problems are overcrowding and disrepair in the vast numbers of colonial-era properties in most cities, together with hurricanes destroying one million dwellings in the last decade. The most recent was Hurricane Sandy which hit eastern Cuba in 2012, flattening 17,000 homes and damaging a further 150,000.  Building output of less than 40,000 units per year struggles to redress the balance.

For the last five years, western Cuba has been spared by the annual hurricane seasons.  It’s a welcome respite, but nevertheless Misael is certain he has a house strong enough to resist future storms. In March last year Hugo Chávez died of cancer: in Misael’s garden a small sign reads, ‘Chávez, the people love you’.