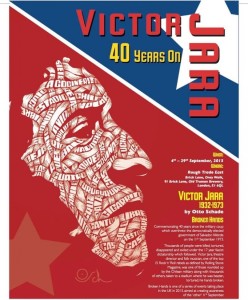 Today is the fortieth anniversary of the coup that toppled Salvador Allende.  There are still many unresolved crimes from his period in power.

Twenty years ago, I spent a week working on a housing project in one of Santiago’s poorest barrios. It was only three years since Pinochet had left office; people guardedly expressed a mixture of relief, anger and continuing apprehension. At the end of the week I was invited to a middle-class wedding in Valparaíso. Talking to the bride’s aunt, I incautiously referred to the country’s having emerged from dictatorship. She took a step backwards. ‘Dictatorship?’ she said loudly. Everyone turned to look at us. ‘Dictatorship? There has never been a dictatorship in this country, only firm government.’

Today, forty years after the coup that overthrew Salvador Allende, the segment of society that denies Pinochet’s brutality is smaller but still powerful. They have so far managed to frustrate the desire for justice of the relatives of the 3000 or more people known to have been killed under the regime. For his 2010 documentary Nostalgia for the Light, Patricio Guzmán joined the women who spend weekends combing the Atacama Desert, looking for the remains of relatives imprisoned and tortured before they were shot. One, Vicky Saavedra, discovered her brother’s intact foot. Most search without success. The army still refuses to help identify graves or investigate crimes, although individual former soldiers have done so.

Last month, however, Chile’s judges apologised for their inaction during and after the dictatorship, when they rejected an estimated 5000 petitions submitted by victims’ relatives. Britain had an inadvertent role in helping to change the judiciary’s attitudes, through Pinochet’s arrest in London in 1998. Even though he was eventually released (thanks to what Christopher Hitchens called New Labour’s ‘gutlessness’), the emboldened judge Juan Guzmán had him indicted soon after his return to Santiago. By the time of Pinochet’s death in 2006 more than 300 charges had been laid against him and actions against other culprits have gradually followed.

The folk singer Víctor Jara was killed in the Estadio Chile prison camp a few days after the coup. Joan Jara, in Víctor: An Unfinished Song, tells the story of her husband’s capture and death: his hands were broken before he was killed in a game of Russian roulette. Eight men were apparently involved, several of them now awaiting trial in Chile. The one alleged to have delivered the shot to his head is Lieutenant Pedro Barrientos Núñez, now a US citizen living in Deltona, Florida. Joan filed a lawsuit against him last week for crimes against humanity and torture, eight months after he was indicted by a Chilean court.

Unlike the women in the Atacama Desert, Joan Jara was able to reclaim her husband’s body shortly after his death, when he was recognised by a sympathetic morgue worker. He was reburied, with thousands in attendance, in 2009. ‘Víctor is one of the well-known victims,’ Joan has said. ‘If we can get justice for him our hope is it will open the floodgates for all those others destroyed and disappeared in that terrible time, those whose names are known only to their loved ones.’