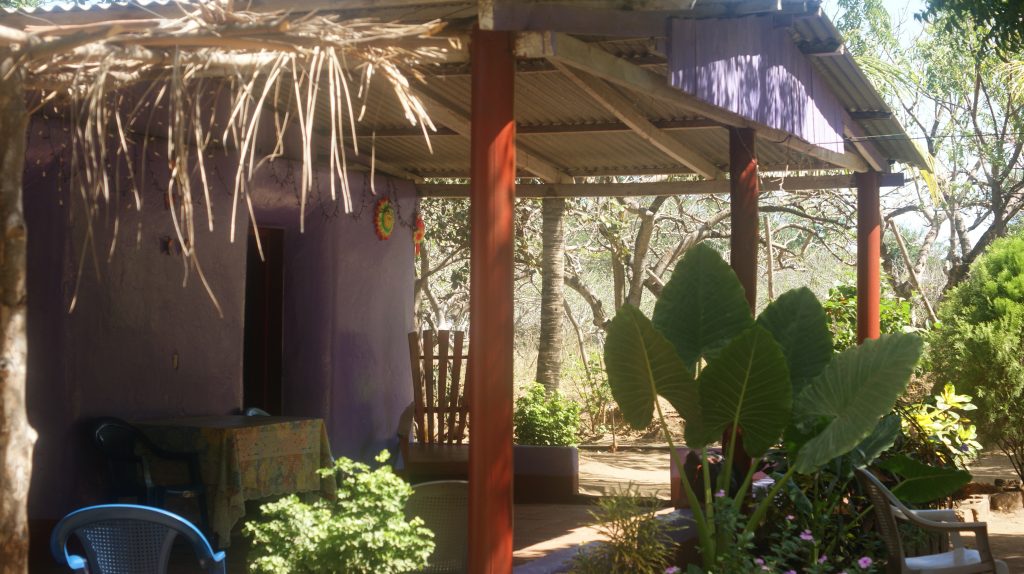 One of the regular donors to projects in Masaya is the London-based Southern Housing Group, a large housing association. In January we were able to visit two local farming families with Will Routh, Southern’s Head of Sustainability and ask how they’d benefited from the LMLG-ADIC project work.

First up was Manuel Hernández, who’s been farming for about 30 years and started using ADIC’s organic methods over ten years ago. These are aimed at protecting the soil and water resources by installing wind breaks and terraces, and adopting organic techniques to husband crops instead of using more expensive chemicals. Manuel showed us his healthy-looking melon plants, sown at the start of the current dry season, and he explained how he had ‘trained’ them to grow well on the limited water supplies he is able to give them. Then he dug up some fat yucca roots (otherwise known as cassava – see second photo) to show us the quality of that crop too.

Apart from learning new farming techniques, Manuel had benefited from a water tank installed on his farm in 2003, and still in active use, that was financed through a Leicester-Masaya Link Group project funded by the British embassy in Nicaragua. This enabled us to build more than 100 water cisterns on similar farms, for which the farmers paid in quotas, allowing about 50 more to be built using the recycled money. At the time, the water supply here was extremely unreliable, sometimes disappearing for weeks at a time. Now it’s more regular thanks to government investment, but Manuel’s family still keeps their tank topped up. It may prove important if climate change (which has already resulted in three failed rainy seasons) eventually means that water has to be rationed.

Our second visit was to Antonia Concepción and her family, who are also small farmers aided by ADIC. The main reason for visiting them (and they are used to visitors) is the substantial straw bale house they built with help from LMLG and UK housing associations 12 years ago. As it happened, the house – in excellent condition and showing no damage from recent earth tremors – had just been repainted (see top photo). At the time it was built it housed 17 family members (now reduced in numbers – see third photo), at a cost of less than $3,000 for 70 square metres of floorspace. Although the straw bale project was small, the dozen houses built are all still in use and in good condition, despite scepticism that the material would soon deteriorate.

Doña Concepción has added to the house by building a kitchen with one of the ‘improved stoves’ now being promoted to reduce smoke pollution and use less firewood. Two of her daughters are involved in a current ADIC project, funded jointly by LMLG and the Swiss NGO Interteam, to enhance the educational opportunities and work prospects for teenagers living in two rural areas. They are studying computer use and English in Saturday morning classes, in addition to going to the local school.

LMLG has been able to finance its £8,000 share of this project through donations made by Southern Housing Group and other regular donors, including many who pay small amounts per month. Currently one of Masaya’s other twin cities, Nijmegen in Holland, is considering asking us to work with them on a new farming project to start in 2018. Donations – however small – will therefore continue to be important if we are to sustain our work in these small but effective projects in rural Nicaragua.

With thanks to Will Routh for the photos (as well as for making the visit).