Last week the local school celebrated completion of about $80,000 worth of work to totally refurbish its two buildings and provide a proper outside play and assembly area.  The school, a basic structure originally built by local organisation MASINFA in 1993, with funding from Masaya’s twin city of Nijmegen in Holland, was badly in need […]

Solar power has role to play in energy revolution

In recent stories in the Nicaragua Dispatch, Nicaragua has been described as a renewable energy paradise and as ranking third in the Latin America renewables market. But neither story mentions what has become Nicaragua’s forgotten resource: solar energy. Perhaps this is not surprising as the government’s own assessments of its achievement in moving away from […]

Proyecto Sol (‘Project Sun’) has been installing solar panels in remote rural communities for nine years. It’s about to start a new phase in the community known simply as ‘Sector 80’, an isolated area to the north of Lake Nicaragua.  This community, which had no electricity at all and still has no water supply, received […] 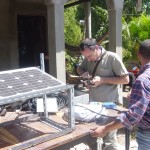 It’s coming up to seven years since we installed the first solar kit in one of the rural communities near Masaya which don’t have electricity.  Our original volunteer engineer, Marc Ricart (from Barcelona – centre in photo), left installers like Norman Padilla (right) with the skills to continue the scheme. ‘Proyecto Sol’ has now brought […]

Following a substantial grant from the British Embassy in Costa Rica (which also covers Nicaragua) towards Proyecto Sol, and a new donation from Midland Heart, the Birmingham-based housing association, we were able to extend the solar panel project to yet another community. It’s in the very isolated area between Nicaragua’s two big lakes, called Palo […]

What does it feel like having electricity for the first time?

What does it feel like having electricity for the first time?  Idalia Cordoba (see picture) puts it like this.  ‘When you regularly have to get up at 3.00 in the morning, more than two hours before dawn, and poke around looking for things with a little torch, you could be sure that the batteries would […]