You are here: Home > Latin America > Under the volcano 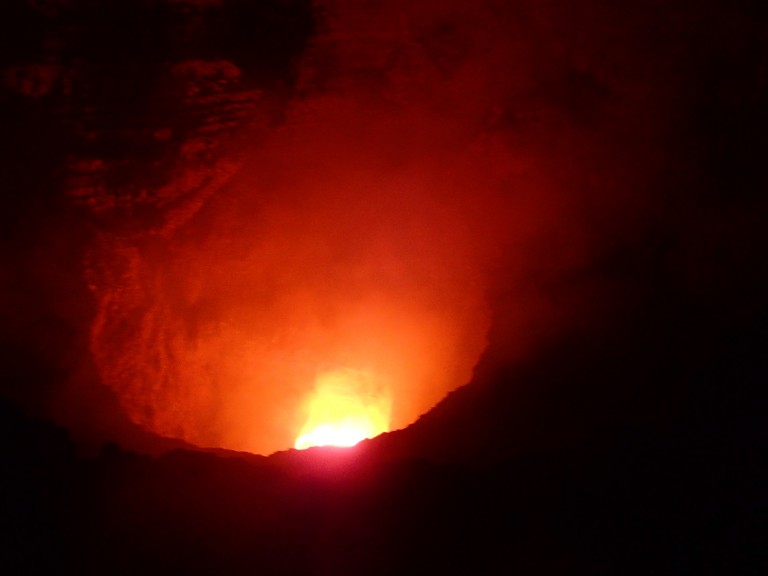 The Masaya Volcano at night

On my morning walk there is a point from which I can see the sulphurous fumes pouring from the Masaya volcano. On the lip of the crater, although not visible from my viewpoint seven kilometres away, is a large wooden cross. It occupies the pinnacle on which a similar cross was first placed in 1529 after the Spanish conquest, by the friar Francisco de Bobadilla. He climbed the volcano in what is now Nicaragua, looked down into its fiery crater, decided it must be the entrance to hell and had the cross put up to keep it firmly shut. Soon afterwards, a more avaricious and foolhardy friar, Blas de Castillo, is said to have climbed down into the crater and, lowering a metal bowl on a long chain, extracted what he thought was molten gold. It quickly turned into an uninspiring lump of black lava.

Masaya was formed about 6000 years before the Spanish arrived, the product of a huge explosion by an earlier supervolcano, which created a caldera measuring ten kilometres by five. On two sides its walls can still be clearly seen and the recently active craters sit within it. The present state of the volcano is benign, however, not the sort to create pyroclastic flows or an eruption that destroys nearby towns.

On the floor of my shed is a long wooden box housing an invar barcode levelling staff, a high precision measuring tool (invar is an alloy of nickel and iron that’s relatively unaffected by changes in temperature). Its owner, John Murray, a scientist from the Open University, last year used it to check the relative heights of different parts of the caldera, now a national park, to help assess the risk of a further big eruption. He first did this 22 years ago, leaving 82 studs nailed into the ground whose precise heights were recorded at the time. Of these, 28 survive, sufficient to reveal what has happened to the volcano’s surface since then. Several days’ work by a team of four using the staff and a digital level showed that the whole caldera had sunk, by as much as nine centimetres at its centre. Murray told me that either the level of magma below the volcano had fallen or the pressure in the magma chamber had dropped, causing the roof to subside.

When Murray made his first visit in 1994, the volcano’s active crater spat out lava bombs every few minutes, but emitted very little gas. Much more gas and far fewer bombs have been evident in the last few years – hence the billowing cloud I see every morning. Murray believes that the magma sits in a huge chamber, filling much of the space below the park, but with a very narrow neck. On his first visit, as when Blas de Castillo went fishing for gold, the magma was visible in the neck of the chamber. Over the 21 intervening years it had fallen away, exposing more of its surface to the air and allowing more gas to boil away and escape.

Murray’s tentative conclusion was that the volcano’s magma supply wasn’t being renewed as fast as in other active volcanoes, such as Mount Etna. Masaya’s last major eruption was in 1772 (the lava from it is easy to distinguish, as it is still being colonised by plant life encroaching on the bare rock). A statue of the virgin is said to have halted the lava flow. It is still paraded through the streets of the city of Masaya every year.

Murray predicted that the volcano would remain in this quiet state until deep processes pushed more magma up towards the surface, which can take centuries. But it seems to have happened sooner than expected. In December the neck of the chamber got blocked, but a few weeks later rock falls reopened it, exposed a boiling sea of lava. The conquistadors’ entrance to hell is visible once again.

In the city, the emergency services regularly practise handling the after-effects of an eruption. Residents view the volcano with suspicion, and don’t trust the reassurances of scientists. Tourists can pay $10 to enter at night-time, peer over the crater’s edge from the adjoining car park and see the incandescent lava a couple of hundred feet below. Holding their noses against the sharp tang of sulphur, they can climb the eroded steps to Bobadilla’s cross for a better view of the hellmouth. I went the other day. But few local people make the journey, or are likely to.