You are here: Home > Housing > The Once Great City of Havana?

The Once Great City of Havana? 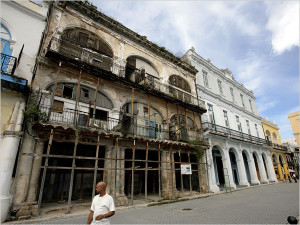 The US journalist Michael Totten has written an article for World Affairs about the Cuban capital, Havana. Titled The Once Great City of Havana (no question mark) it pours scorn on Cuba’s efforts to rehabilitate what is by far the biggest surviving old colonial city in the Americas. Anyone who has been there knows there are thousands of old colonial buildings, many abandoned when the rich fled to Miami after the revolution, now (very fully) occupied by ordinary habaneros, and most in varying stages of disrepair. But visitors in the last few years will have seen the beginnings of a transformation. The core of the old city, the part most frequented by tourists, now looks splendid. Restoration of the lengthy, wave-battered Malecon (the sea front) has begun. And more apartment blocks and old colonial houses both in the centre and in the suburbs have been restored. 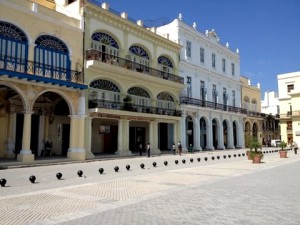 There is still a long way to go. But however far the Cubans get towards restoring Havana’s architecture, you can sense that it won’t be good enough for the likes of Michael Totten. Here’s a taste of his fairly lengthy piece:

‘I’ve seen cities in the Middle East pulverized by war. I’ve seen cities elsewhere in Latin America stricken with unspeakable squalor and poverty. But nowhere else have I seen such a formerly grandiose city brought as low as Havana. The restored part of town — artifice though it may be — shows all too vividly what the whole thing once looked like.’

On his last visit, apparently, he stayed at the same hotel I’ve been in twice myself. To him, though, it’s surrounded by ‘a miles-wide swath of destruction’. Tourists, evidently, don’t see this, they stay in their ‘bubble’. Given that this is one of Havana’s largest hotels, where most guests are tourists, they must go around with their eyes closed. Totten says that the historic core has been restored because ‘only communist true believers would go to Cuba on holiday if the entire capital were still a vast ruinscape’.  Well that’s strange, because Cuba was a popular tourist destination well before the government started to restore Havana’s centre. Of course, Totten’s compatriots have had difficulty seeing this for themselves. In the land of the free, only journalists and a few others are allowed to travel to a country that is only one hundred miles off the Florida coast.

His main message, like those of most commentators on Cuba who can’t bear to have a neighbour that is so different and which eludes the grasp of North American capitalism, is that if only Cuba had free enterprise, and ‘Americans’ could travel there freely, the economy would ‘go into supernova’. Which, of course, is exactly what the US, the Cuban exiles in Miami and – it must be admitted – a certain proportion of Cubans themselves – undoubtedly want.

Totten claims to have taken a bit of a history lesson, which allows him to justify the claim that Havana was once a great city. In one sense of course that’s undeniable: by the nineteenth century it was full of splendid buildings, spilling out for miles from the colonial core.  Its original prosperity came from its location as the point from which the galleons laden with stolen gold and other products would leave for Spain. The rest of Cuba was kept poor and underdeveloped to serve the needs of the capital and its richest inhabitants, who built huge mansions, town houses and commercial buildings. After the Spanish were kicked out, Cuba became effectively a US colony, and Havana attracted ever greater quantities of investment, notably in the twentieth century from the mafia. Read T.J. English’s book The Havana Mob if you want a picture of Havana, playground of the rich and criminal, poised for revolution. If you had money and few principles, it was undoubtedly a great place to hang out.  If you fell foul of the dictator Batista, you ended up in prison or worse.

Richard Gott’s history of Cuba makes clear that Havana was indeed a prosperous city, but at the expense of deep rural poverty, minimal investment in industry and nearly half the population illiterate.  The revolution was fuelled by rural misery but could never have succeeded without urban support, often from the one-third of city dwellers who lived in slums. There had been attempts at insurrection in Havana, independently of Castro’s guerrilla forces, in the years before January 1959 when Fidel arrived triumphantly in the capital. The truth is that by the 1950s Havana’s prosperity was unsustainable, regardless of what you think of Cuba’s subsequent trajectory.

Totten says tourists exist in a bubble but he creates a bubble of his own in looking at Havana in isolation. It’s impossible to understand the history of a city without connecting it to its hinterland.  This is why his comparisons with other cities don’t work.  Havana is unquestionably the finest surviving colonial city in the Americas, but what do we find if we look at others where the colonial heart may be in better shape than Havana’s? Look at Cartagena in Colombia or Granada in Nicaragua. Both have smaller but beautiful colonial centres, but are dominated by foreign investment and property ownership.  They attract thousands of tourists but both have created bubbles themselves, with the poor living in far poorer and more dangerous conditions in the outskirts.  Consider bigger cities like Mexico and the contrast is much greater. The capital is proud host of one of the world’s largest slums, housing four million people. Officially, 20 per cent of Mexicans live in slums: many believe the true proportion may be over 60 per cent.  A similar description applies to Lima, Sao Paulo, Rio and many more Latin American cities.

And in the States itself, is historic but neglected downtown Baltimore really better than Havana?  Or take the example of New Orleans – a wonderful colonial city where nearly 2,000 mainly poor inhabitants died when it was struck by Hurricane Katrina. Cuba is hit by hurricanes almost annually and sometimes twice or three times, but only a handful of people ever die, and help with reconstruction arrives quickly and far more effectively than it did in Louisiana.

Yes, Havana has a severe housing problem but – unlike the poor areas of the cities mentioned above – there are few kids begging in the streets, all go to school and everyone has free health care.  Totten won’t want to admit that of course, but I know Cuban teachers, I’ve been in three Cuban schools and colleges, and I’ve been impressed by healthy kids getting a far better education than in the country where I live (Nicaragua) despite our government’s recent efforts to improve schooling.

But the most depressing thing about articles like Totten’s is their lack of any critical perspective on what would be the outcome if the Cuban economy really did ‘go into supernova’. Within a generation, Havana would probably be another Miami. Would that be progress?  Of course, everyone would have smart phones, but would there be crime-free streets and free health care?  True friends of Cuba like Dervla Murphy, who have spent much more time in the country and spoken to many more Cubans than Totten (or I) have, take a much more nuanced view.  The essential question is, how can Cuba adapt and survive while still retaining the very best of what it’s achieved over the last fifty years?  Not only does Michael Totten fail to answer that question, he doesn’t seem to be particularly interested in asking it.

A shorter version of this article is in the London Review of Books.

2 responses to “The Once Great City of Havana?”